Ex Libris, the Game of First Lines and Last Words 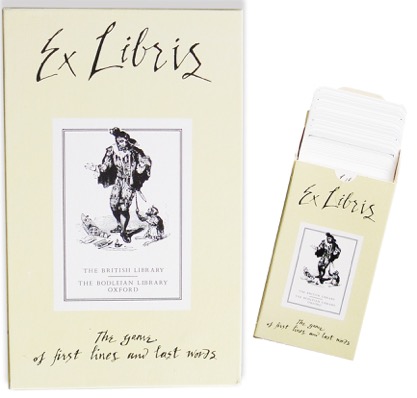 For the first time ever, Ex Libris, the booklover’s favourite game, comes out of the parlour and on to the stage at the 2015 FT Weekend Oxford Literary Festival.

Come and watch some of our wittiest wordsmiths John Lloyd, Craig Brown, Helen Zaltzman and Alex Bellos bluff and counter bluff as they write fake but plausible opening or closing sentences to genuine books, attempting to fool fellow players into believing that their scripts are the authentic first lines or last words of these works. Ex Libris was devised by Oxford Games Ltd and is endorsed by Oxford’s Bodleian Library.

Lloyd is a television producer and writer whose work includes Not the Nine O’Clock News and Blackadder. He presents BBC Radio 4’s The Museum of Curiosity, a spin-off of his phenomenally successful, Qi.

Brown is a critic and writer whose work includes the parodic Private Eye diary, and 18 books, including his most recent bestseller One on One. He is winner of the Sony Gold Award for comedy.

Zaltzman is an award-winning podcaster. She makes the comedy show Answer Me This! and etymology podcast The Allusionist and appears regularly on BBC Radio 5 Live and BBC Scotland.

Bellos is bestselling author of Alex’s adventures in Numberland and Alex Through The Looking-Glass: How Life Reflects Numbers and Numbers Reflect Life. He is a curator-in-residence at the Science Museum, and is currently the Guardian’s maths-blogger.