More than 150 guests gathered for a reception hosted in London by the Delegation of the European Union to the United Kingdom to mark the launch of the 2023 FT Weekend Literary Festival.

Guests, including authors and festival supporters, heard welcomes from the deputy head of the delegation Nicole Mannion and festival director Sally Dunsmore before a short speech by the Chancellor of the University of Oxford Lord Patten.

The Delegation of the European Union to the United Kingdom supports the festival’s Voices of Europe programme, which gives a platform to speakers from across Europe.

Ms Mannion said: “We see literature and the arts as a fundamental part of our shared European culture. There is more that unites us than divides us. The festival embodies those bonds between us very well.

“Our writers have long looked to each other for inspiration, with travels to and fro across Europe and the UK. They have been indispensable and active builders of our common European identity.”

Lord Patten is a key supporter of the festival. Each year he invites a keynote speaker for the Chancellor’s Lecture, which this year is given by the thriller writer Mick Herron.

Lord Patten said: “One of the things we do really well in this country is book festivals. It says something wonderful about this country that so may people attend them.

Authors get ready for 26th festival

A host of award-winning authors are lined up for the 26th FT Weekend Oxford Literary Festival.

Standup comedian the Pub Landlord, otherwise known as Oxford-educated historian Al Murray, who is pursuing a second career as a successful history presenter on television, speaks about his entertaining look at military leadership during World War II.

Other historians appearing this year include Simon Sebag Montefiore on his new family history of the world.

Irish novelist Colm Tóibín receives the Bodley Medal when he speaks about his life and work at the Sheldonian. And three great Irish novelists, John Banville, John Boyne and Neil Jordan, join forces for an unmissable conversation about their latest books and Irish literature and history.

Other novelists appearing at the Sheldonian include Booker winner Eleanor Catton on her new novel, and crime writers Val McDermid and Anthony Horowitz.

Festival debates the biggest issues of the day

As always, today’s hottest issues will be at the heart of the festival with debates on among others climate change, and trust in politicians, and a new open session where the audience will have a chance to ask questions of a panel of media and political figures.

Chair of the UK’s Covid vaccine taskforce Kate Bingham and venture capitalist Tim Hames look back at the country’s successful vaccination programme. And former head of the Diplomatic Service Simon McDonald, who hit the headlines over the summer after he accused Boris Johnson’s number 10 office of lying, reflects on the good and bad of leadership at Whitehall.

Author of the National Food Strategy and owner of the Leon restaurant chain Henry Dimbleby shares his views on why our food system is heading for disaster and on why he’s not happy with the government’s response to his work, and children’s author and founder of the Farms for City Children charity Michael Morpurgo gives this year’s Peter Roberts Compassion in World Farming Lecture.

Science is well repesented with appearances by the Astronomer Royal, Martin Rees, who receives the festival’s science and innovation award, Thomas Hertog, who collaborated with Stephen Hawkings on his final theories, and Roger Highfield and Peter Coveney on the possibilities opened by ‘virtual’ copies of human beings known as digital twins.

Italian-Australian actress Greta Scacchi, best known for roles in films such as White Mischief with Charles Dance and John Hurt, Presumed Innocent with Harrison Ford, Merchant Ivory’s Heat and Dust, The Player, Emma and Looking for Albrandi, talks about her life and career.

The festival once again features a host of children’s favourites including How to Train Your Dragon author Cressida Cowell, Alex Rider author Anthony Horowitz, and the Agatha Christie for young people, Robin Stevens.

Rob Biddulph, the author and illustrator whose online classes went viral during the Covid lockdown, brings his Draw with Rob show to the festival for stories, a singalong and lots of drawing.

Meanwhile, Sky at Night presenter Maggie Aderin-Pocock, returns to the festival following her hugely successful first appearance to talk about her latest children’s book, Am I Made of Stardust?

Supporters of the festival green room

Delegation of the European Union to the United Kingdom

Supporter of the festival's Voices of Europe programme

Books which change you, your mind, your world

Supporters of the festival green room

Delegation of the European Union to the United Kingdom

Supporter of the festival's Voices of Europe programme

Books which change you, your mind, your world 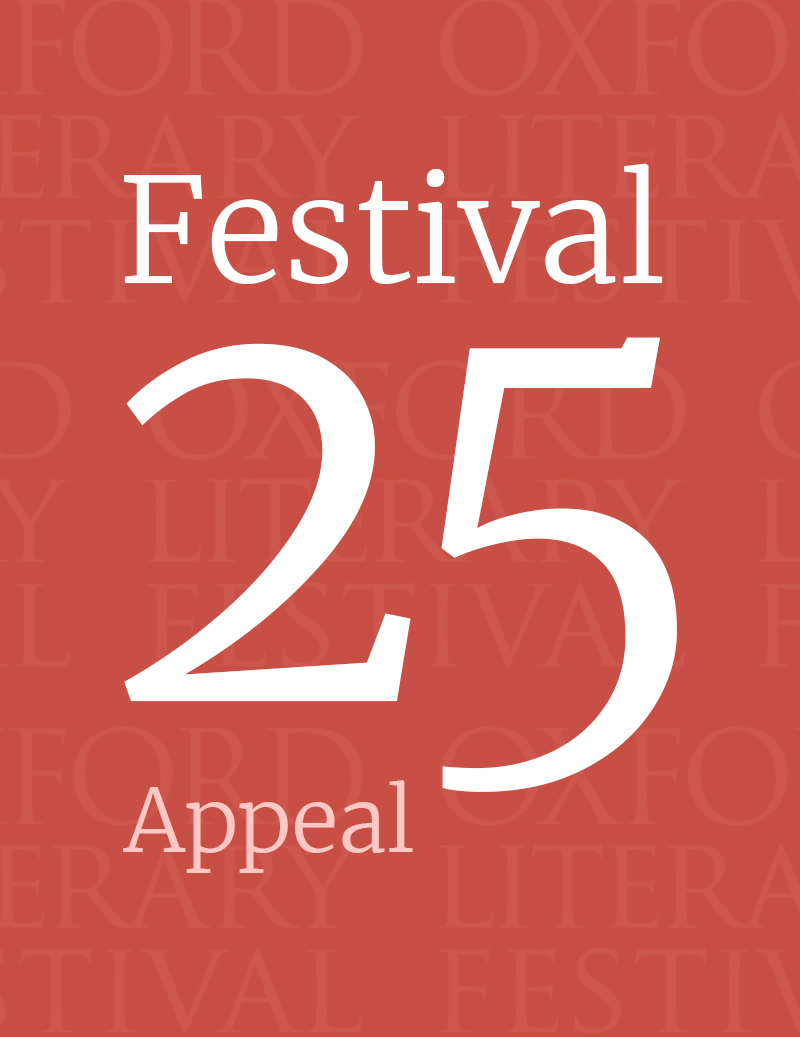 In 2022 we celebrated our 25th Oxford Literary Festival